Have you ever been so deeply touched by an idea, that you had no choice but to leave a comfortable existence behind, and pursue it … like nothing else mattered? Well, that’s exactly what happened to sleepbus founder Simon Rowe … and whilst it’s still early days, he’s on a mission to ensure that people who are sleeping rough get a comfortable, safe night’s sleep.

“Following 12 months of research including being homeless myself, the idea of sleepbus was developed. From that research, the issue that kept coming up was, not enough safe places to sleep while working on pathways out of homelessness. What was worse, was allowing people to fall deeper into the cycle of homelessness, rather than catching them early, keeping them safe and healthy until they got back on their feet.” 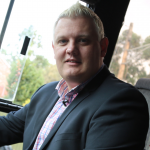 There’s loads more insights just like this that will help you build that beautiful business of yours into the empire it deserves to be. Hit the PLAY button above to listen now, or subscribe free to hear the full interview.

Here’s just some of what we cover in this very candid interview:

@SleepBus founder Simon Rowe on how he’s providing a safe and comfortable place for those sleeping rough to sleep.

A little more about today’s guest, Simon Rowe of sleepbus:

Three years ago Simon Rowe left his cushy corporate job in a mahogany-clad corner office, to start sleepbus … a charity that produces fully decked out buses to provide safe, temporary, overnight accommodation to those sleeping rough on the streets. Today he has one fully operational sleepbus in Melbourne, and a vision to build 319 sleepbuses providing over two million safe sleeps per year all over Australia.

Here’s what caught my attention from my chat with Simon Rowe from sleepbus:

But the marketing gold doesn’t stop there, in this episode: